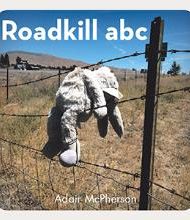 Meant to be an edgy, ironic take on traditional books geared to teach children the alphabet, Roadkill abc features photos of roadside discards, each beginning with a different letter of the alphabet.

Indeed, this is not your grandmother’s ABC book. In these pages, readers will find dead animals left on the pavement (rat, owl, possum, snake, porcupine), discarded food (a lone orange lifesaver stands for “c” as in “candy”; a crushed watermelon for “w”), trashed household items (an old glove, a crumpled mattress), broken toys and other random objects.

This is an entertaining idea for those with a twisted sense of humor, although its execution could use more care. First, the author seems to have been unable to come up with a legitimate photo for “k” and instead shows a dead coyote and its phonetic spelling (\ki-’o-te\). Ditto, the use of a legless plastic toy knight for the letter “n,” spelled (\’nit\). Surely one could have found items for both letters without resorting to phonics. Similarly, some of the pictures make one wonder if they were posed (a pristine stuffed lion atop a fence), rather than authentic.

Finally, the description on the back claims the book “is designed for viewers of all ages,” but it’s hard to imagine a small child appreciating the sight of a severed doll’s arm (for the letter “a”) or a car crushed at a railroad crossing (for the letter “x”) just before attempting to fall asleep.

Giving the book its most lofty interpretation, it could be offering a comment on the fragility of existence and the wasteful nature of our materialistic society. On the other hand, perhaps, like the bestselling book Go the F**k to Sleep, it’s just a book-length joke for partygoers. Taken in the spirit of the latter, readers won’t care much about the flaws mentioned and will file Roadkill abc under the letter “a” — for “amusing” novelty item.