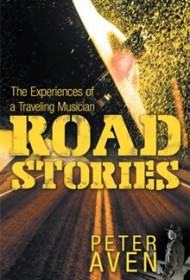 Ever since the heyday of rock bands destroying hotel rooms and leaving behind a path of devastation and sexual conquest, music fans have had a prurient fascination for the backstage stories that go untold.

Peter Aven’s Road Stories, subtitled The Experiences of a Traveling Musician, unfortunately isn’t the book that tells all. That’s because Aven is a drummer in various regional bands, but none that we know from the hit charts. So although he’s made a living as a touring musician, he’s not living the lifestyle of, for example, the late Keith Moon, the legendary drummer of The Who. Also, Aven masks many of the names in these stories to protect the guilty upon advice from his attorney, as he explains in a disclaimer. Most of the time, he avoids names altogether, using the generic nouns “town,” “singer,” “bar” and so on. Without the specifics, the stories don’t resonate.

Some of the tales are genuinely interesting, such as Aven’s stories about playing in a cruise ship band and hitting some rough seas or playing at an old Poconos resort amidst a swarm of spiders coming out of the ceiling. His tale about the friend who drove his bass and ’69 Mustang into lake is also amusing.

But others, such as Aven’s trip to a small-town hospital after cutting his hand on a cracked cymbal, or the lead singer who was arrested before a gig because he was mistaken for a man wanted for armed robbery and assault, aren’t that memorable.

These Road Stories might make for fun conversation in a bar, but they don’t always add up to an engaging book. There’s probably another, better story to be written, about how Aven, a classically trained concert violinist, became a drummer in a multitude of faceless touring rock bands. Perhaps one day, he’ll tell it.