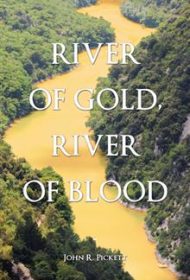 The book opens on American river trader George Smith, known as Jorge, as he travels down a river in an unnamed Central American nation. When attackers shoot up his boat, Jorge takes refuge with a local farmer, who asks him to pick up his adopted daughter Elizabeth in town.

As Jorge fulfills this duty, he and Elizabeth move inevitably towards a budding romance. Readers also learn that Elizabeth has a dark past as the biological daughter of an American gangster and former paramour of a mobster. The story soon finds Jorge tracking down the men who shot up his boat, a cold-blooded American hitman named Riggs stalking Elizabeth and torturing her family, and the couple’s tempestuous relationship building to a flashpoint as they try to tame each other’s wild spirits.

Although the premise is promising, the story offers an excess of subplots and secondary characters.  While some characters are archetypal — from Jorge’s roguish charm to a white-hat hero sheriff to a literal damsel in distress — the scenery-chewing villains can be a bit cartoonish. The plot also contains multiple contrivances as Pickett introduces random characters who appear later almost as afterthoughts simply to tie up narrative threads.

In addition, the dialogue can be problematic; Jorge and Elizabeth often relate everything they’ve been through to new characters, even though readers have already experienced those actions. And the story’s climactic finale is followed by a twisty final revelation that may leave readers scratching their heads.

The result is an entertaining but uneven story that sometimes loses momentum due to a few inherent flaws. Still, readers may appreciate the lead characters, who are likeable and largely engaging.