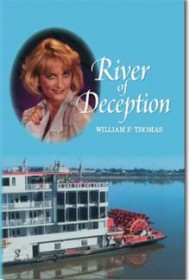 When con man Henry Belk climbs aboard the River Queen for a riverboat cruise down the Mississippi in William F. Thomas’ River of Deception, he has one objective in mind: to seduce a wealthy woman and steal her money. He soon learns, however, that he has met his match in this cleverly plotted romance novel.

Belk has been successful in this venture before; he’s carrying with him a briefcase filled with nearly $65,000 in cash stolen from his ex-wife. He married her in a quickie Vegas wedding under an assumed name and left her only a few weeks later, just after relieving her of the cash in her safe.

This time, in addition to the cash, Henry is armed with a new wardrobe and a new identity as a New York stockbroker. Upon boarding the ship, he spots his mark: the beautiful and alluring Paula Murphy. When he arranges a meeting with her, he doesn’t realize that the funny feeling in his gut is more than just greed: Paula is pulling a con of her own.

The story that follows is a flirty cat and mouse game. Paula and Henry are both trying to be someone that they are not, and each attempts to con the other out of their money. Henry has experience on his side, but the novice Paula has her feminine wiles, smarts and luck. Though they don’t know it at first, they both come from difficult childhood backgrounds. They share this bond and soon realize they also share an attraction to each other.

The creative con story and the romance between Henry and Paula play out well together. Unfortunately, the descriptive passages and dialogue in the book are cumbersome, and there is too much repetition, usually of clichéd phrases such as “arm and arm like two young lovers.” Despite these flaws, the engaging characters, clever plot and great surprise ending make River of Deception a generally enjoyable book.