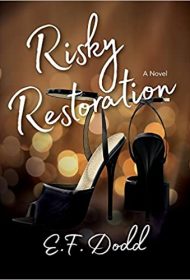 Risky Restoration is a romance novel about a scorned woman seeking closure from her last relationship.

Kesler “Kez” Walsh is pessimistically navigating relationships since being burned by her college sweetheart, Miller Thompson. Then, after another failed relationship, she finds herself surfing the Internet to learn what her ex has been up to lately—only to discover that Miller is marrying Callie, the bartender from the bar they frequented when they were a couple. He’s also going to be attending his high school reunion in his hometown of Rochester, New York.

Although Kesler lives in North Carolina, she scores an invitation to the reunion. She wants to attend to see if she’s over Miller, and she convinces her best friends, V and Rae (who think she’s crazy) to come with her.

On their first night away, they meet Jackson Jenkins at a bar when he sends an expensive bottle of wine to their table, before sweeping Kesler off her feet with his rugged good looks. While determined to carry out the plan, Kesler can’t shake the undeniable attraction she feels for Jackson, and he’s determined to help her forget her ex altogether, even after learning the truth about why she’s there. But will Kesler’s jaded past keep her from creating something meaningful with Jackson?

Readers will root for these easily relatable, well-drawn characters, while remaining captivated by the growing romance between Kesler and Jackson. The author skillfully ratchets up the romantic tension between the two by playing up the “will they/won’t they” question as their sexual encounters are repeatedly interrupted.

The real power, however, is found in the author’s humor, particularly in the laugh-out-loud scene that finds Kesler and her two best friends donning fake wigs to hide their identities while trapped in a rental car with a bug. Readers will enjoy the levity throughout.

In all, the author expertly weaves together humor and heart to create an engaging novel sure to satisfy romance readers.