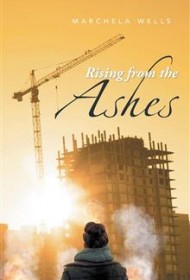 In this suspenseful, if uneven, tale of true love and happiness, a damaged young woman heals her heart and finds love, only to have it nearly ripped away.

As a teenager, Tina was sexually assaulted by a group of three young men. They went to jail and she received a large financial settlement. A few years later, just as her promising business career was beginning, her parents were killed in a plane crash.

The darkness left from her attack and her parents’ death now casts a shadow over her life. She fears men and carries a gun. Her only family is her bodyguard, Charlotte, and her housekeeper, Marian—that is, until she encounters the handsome Cliff at a business meeting. Their chemistry is instant, and they become engaged only days into their relationship. But despite their love, things don’t go smoothly. Someone is trying to harm or kill Tina, going so far as to bomb buildings.

Author Marchela Wells deftly unveils the plot’s suspenseful elements, which offer plenty of excitement. Her execution in other areas, however, can be problematic. Wells goes to great lengths to create an immediate connection between Tina and Cliff, for example, but it seems unlikely that a woman with such fears could so quickly trust a man. Their sudden engagement adds to the credibility gap.

Readers should also be forewarned that the author’s descriptions of the couple’s sexual encounters are quite explicit (and Wells’ use of formal words for body parts, such as “penis,” “vagina,” and “genitals,” seems decidedly unsexy).

Spelling and punctuation errors appear often, as does a confusing use of italics. Initially, the italicized sections seem to represent Tina’s subconscious, but the use becomes inconsistent and distracting.

The book finishes strongly, with an action-packed climax and the promise of more to come in a series. But overall, Rising From the Ashes requires thoughtful polishing before it can provide a sexy and exciting read for fans of romantic suspense.