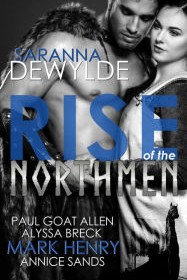 Rise of the Northmen is an engrossing collection of erotica novelettes with a theme of Vikings, mythology, and the supernatural. The five stories included share a common thread: a primary female character who has both strength and undeniable sexuality.

In “Mark of the Raven” by Alyssa Breck, Kára has been called to Valhalla and now bears the mark of a Valkyrie. She has left her mortal love, Gram, behind on earth, and when Gram is marked for death by a visiting raven, Kára is willing to sacrifice everything dear to her to save his life… but even that may not be enough.

Throughout this collection there are beautiful maidens, brave Valkyrie, and dangerous, sometimes brutal, but irresistible men, with sensual and graphic sex smoothly incorporated into the narratives. Each story is compelling and well developed, with fully realized characters and complete, satisfying plots.

Both “Fathoms” and “The Wolf Who Swallowed the Sun” have elements of horror, but the blood and gore aren’t terribly graphic. The latter is perhaps the one story that doesn’t fit with the rest, due to its more current setting. Also, although an enjoyable read, the plot is more complicated than the others, with almost too much detail for the short format.