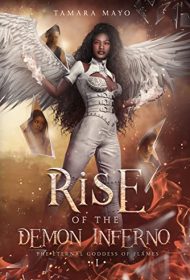 In the first volume of a new series, Tamara Mayo introduces the combatants in a war for the fate of humanity.

Siblings Luke, Shana and Matt are the new kids in a small South Carolina town. There, they meet three rebellious classmates, Naya, Ana and Carlo, and the powerfully but creepily attractive sister and brother, Laraii and Carii.

The narrative then pivots to Naya’s early years, offering an extended account of the rivalries taking place beyond the earthly realm, before returning to the story at hand. Laraii attempts to seduce Luke (although he and Naya are clearly meant for each other), leading to a final showdown with the demons.

Rise of the Demon Inferno is undeniably ambitious, but feels untethered in its current state. The narrative touches on many metaphysical concepts, including not only angels and demons but Vodou, the Akashic Records and various Bible stories. It remains unclear, though, how all these concepts work together in the novel’s universe, making for confusing reading.

The novel is full of strong characters, particularly Ana with her troubled childhood and ill-advised prior liaison with Carii. But extended flashbacks to reveal their backstories are distracting. The long interlude involving Naya’s journey is particularly disruptive, especially as the supposedly higher beings she interacts with are petulant and mean-spirited – and not nearly as interesting as the characters in the story’s main thread.

Rise of the Demon Inferno features some fascinating ideas and characters. A more disciplined narrative structure would help them appeal to a larger audience.