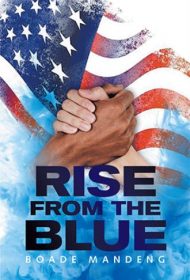 Rise From the Blue is a brief work of fiction about an African immigrant’s struggle to find his political place in the U.S. amid current social upheavals. It consists of conversations between protagonist John Nobola and his friends and family, as well as lectures Nobola delivers at political rallies.

An ardent Trump supporter, Nobola views Democrats as manipulating immigrants and minorities with empty promises and social programs. He believes movements for police accountability have gone too far and that their leaders have encouraged lawlessness and destruction.

Boade Mandeng’s book fails as a story because little happens and there’s no journey of growth or change. It fails as didactic fiction because, although Nobola espouses strong opinions, he isn’t tested by any capable opponent. His liberal friend Abenda winds up agreeing with him, and when Nobola’s coworker challenges his support for Trump, she devolves into insulting him, reifying Nobola’s belief that liberals are mean. Democrats in Nobola’s world are cartoonishly extreme, favoring completely open borders, forsaking God in exchange for power and viewing brutal dictatorships as blueprints for America.

The book’s fatal flaw, however, involves its contradictions. Nobola confusingly labels Democrats as both socialists (big government) and anarchists (no government). He disparages Critical Race Theory while seemingly making the case for it by encouraging young people to explore our dark cultural past to forge a better future. He decries mainstream media’s “fake news” while erroneously saying that most people voted for Trump, and he remarks that Trump denounced the police killing of a citizen (apparently George Floyd) but omits Trump’s hesitance to denounce right wing extremists (e.g., the Proud Boys or the Unite the Right Rally).

It’s a shame, because there’s an important place on the shelf for a book that provides a thoughtful, reasoned critique regarding whether the left has failed its immigrant and minority constituents. Regardless of its aspirations, Rise from the Blue is not that book.