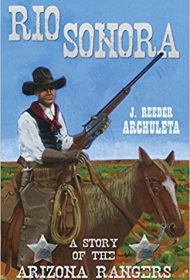 J. Reeder Archuleta’s utterly captivating turn-of-the-century Western recalls the old TV series 26 Men. Based on true incidents, episodes centered on the Arizona Rangers’ attempts to maintain order. It rivaled Gunsmoke and Bonanza in an era when Westerns dominated the networks, and true fans were loath to miss even one of the 78 installments between 1957 and 1959. Rio Sonora could have easily been the basis for several episodes.

Owen Jones, Archuleta’s protagonist, is the consummate lawman, among the last of a dying breed. Jones escaped a Jesuit orphanage on the banks of the Mississippi at 14 to make his living as a bare-knuckle fighter before moving west to become a Texas Ranger. But when Texas became too tame, Jones, like many of his cohorts, headed farther west to join the Arizona Rangers.

Rio Sonora takes place as Jones, nearing 50 and suffering from arthritis caused by his pugilist past and the hard Ranger’s life, heads to Mexico to help the federales round up a gang of Mexicans and Americans who are guilty of rape, murder, rustling and bank robbery. Along the way, he helps school a rookie Ranger, takes a bullet, falls in love with a beautiful Mexican widow and conveniently fails to capture all the villains, leaving open the possibility of a sequel.

Archuleta excels in painting a vivid picture of the American West just as the modern era is about to change everything. As automobiles begin to take over the streets of Phoenix, Jones doubts there is any future for them (autos need roads, but horses can go anywhere). Jones is a charismatic hero: honest to a fault; charming to women, fellow lawmen and the villains he captures; thirsty for justice; and fearless in battle. The story is fast paced and exciting.

In all, Rio Sonora is pure pleasure for any Western fan. After reaching story’s end, readers will hope the wait isn’t long before Archuleta reprises Jones in another adventure.