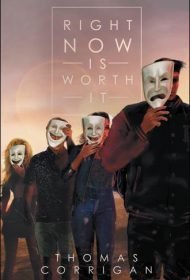 Thomas Corrigan’s novel, Right Now Is Worth It, tracks the intertwining lives of four teens who attend the same suburban high school.

The novel is told from four different perspectives: impoverished Emma, whose sister just died and who lives with an abusive stepdad; Shaun, who is obsessed about his appearance and is crushing on Emma; Sophia, a rich girl with problems, and Jackson, an athlete struggling with his sexuality. The four are friends or dating each other and face many challenges as the story unfolds.

Corrigan notes in his biography that he himself is a recent high school graduate, and he clearly knows his characters’ struggles.  The novel presents teens realistically, showing their obsession with documenting their lives online and how hard it can be to show their real selves, rather than a façade, to the world. This is one of the novel’s great strengths.

Unfortunately, while the teens’ conversations may ring true, they aren’t as interesting and their voices aren’t as distinct as they could be.  Additionally, the author’s descriptions can sometimes be jarring. At one point, the author writes: “Nervous as a virgin in a prison shower, Shaun held his breath, closed his eyes and tensed his muscles as he slowly lowered his arm around Emma.” Some readers might find it in bad taste to compare dating anxiety with a prison shower.

Editing issues also occasionally appear, as when, at the beginning of the third chapter, the author repeats the exact same dialogue of characters saying good-bye to each other that appeared at the end of the second chapter. Although the two chapters are told from different characters’ viewpoints, this repetition takes readers out of the story.

While this novel falls short of its potential, its themes of teen angst and family dysfunction amidst a social media-obsessed world should strike a chord with many young adults, and it will be interesting to watch Corrigan’s talent develop in future offerings.