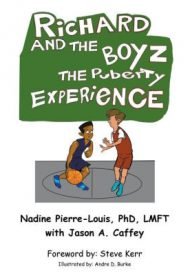 Educator, marriage and family therapist and founder of Doc N Jock, a company aimed at enhancing awareness of male issues, author Nadine Pierre-Louis is also the single mom of two boys. When it came time for The Talk about puberty, she realized she was woefully unprepared. She created Richard and the Boyz to help young males better understand what happens to them during puberty.

The young “boyz” interact with each other in a playground or at school, asking questions such as, “So, when I get a boner, why does it get hard?” Then the scene changes to the lecture hall, where their questions are addressed.

That said, the explanations are largely accessible, and Pierre-Louis thoroughly covers issues that pubescent males need—and want—to know. Those willing to carefully read the book will be rewarded with answers to coming-of-age questions that concern them most. With its emphasis on dispelling myths and inaccuracies, the book can also be a useful guide for parents of young sons as they discuss puberty together.