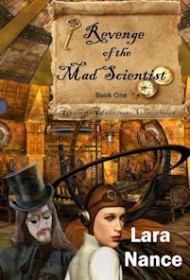 Revenge of the Mad Scientist is set in an alternative, steampunk world where everything mechanical is powered by steam. There are steam-driven motor-cars, airships, and complicated gadgets. The milieu of the story is approximately Victorian, and the author, Lara Nance, is adept at blending the quirky, eclectic aspects of the steampunk genre with the conventional courtesies and gas-lit atmosphere of a bygone era. All of this is entertaining, as is the fast, plot-driven pace of the novel.

Lady Arabella Trunkett is attending a ball at her father’s mansion when agents from a hostile country kidnap her father, a political dignitary. Unable to persuade the authorities to follow-up on important clues, she sets off, accompanied only by her boy-genius ward and intractable butler, to rescue her father.

Rollicking adventure ensues. Lady Arabella is thwarted by assassination attempts, airship crashes, another kidnapping, an enraged nomadic tribe, and pirates. The intrepid heroine retains her equanimity through all these trials, however, except when she finds she must rely on a former fiancÃ© who left her waiting at the altar. The romantic tension in the novel revolves around whether Lady Arabella and her former suitor will be able to resolve their differences and rekindle their love.

While the plot is filled with entertaining action, those who desire more ballast for their fiction may find that it lacks integral character development. Nance gives her characters no more weight than that which is absolutely necessary to push the plot along. We know what motivates them in a general sense, but not the small turns of thought that tell us who they are. The discerning reader will wish the author had slowed her pace just enough to give the characters depths worth fathoming. Fans searching for straightforward steampunk tales of derring-do, however, need look no further than this first installment to Nance’s Airship Adventure Chronicles.