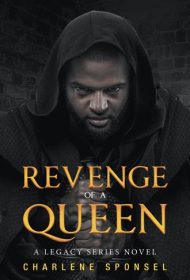 The internecine struggles at the heart of Charlene Sponsel’s fantasy tale Revenge of a Queen, the second in her Legacy series, are worthy of William Shakespeare’s tensest history plays.

As in the Bard’s goriest explorations of the War of the Roses, Sponsel offers a drama fueled by the machinations of a royal family. Instead of medieval England, the conflict occurs in the imagined realm of Greater Conica, which bears a vague resemblance to Europe of the 1500s and 1600s.

The story opens at a tense time for the fictional world. Queen Balia, the calculating, power-hungry daughter of the late King Tali Major, faces a tenuous peace with her brother Cam, the Earl of Liot, and Lili, widow of the late king and Cam’s secret lover.

That peace shatters as Lili’s son prepares for his coming- of-age ceremony. Cam finds Lili’s lifeless body at the royal court, apparently poisoned by Balia, and vengeance quickly becomes his primary goal. The book tracks his imprisonment by his jealous sister and his quest for revenge after his escape. His goal is complicated by the slowly unraveling knowledge that Lili’s poisoning left her only appearing to be dead. Readers learn that Balia staged the fake murder to make Cam and Lili suffer for their perceived betrayals, which took place in the previous book.

The author’s intricate machinations begin early in the novel. Thus, readers just entering the world of Conica will find a dense set of plots and betrayals that can become overwhelming. While the author offers genealogical charts and a glossary of names and positions to help, jumping into such a complex storyline is confusing.

Sponsel’s graceful, engaging narrative style partially compensates for the book’s density. And the love story between Cam and Lili holds the tale together, investing their relationship with real stakes and compelling sincerity that keep readers engaged.

Those willing to work their way through the convoluted intrigue will reap these rewards for their efforts.