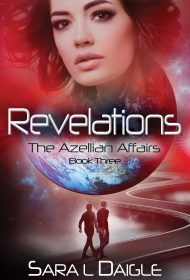 The third installment of Sara L. Daigle’s Azellian Affairs saga (after 2018’s Triangle) continues the author’s romance and science fiction-blending storyline, which revolves largely around the relationship between Earthling Tamara Carrington and her new husband Alarin Raderth, a human-looking alien with psi powers from the planet Azelle.

As the novel opens, Tamara—whose daughter Rashella is less than a year old—is struggling with being a stay-at-home mother in Denver. Her life is turned upside down when she discovers she’s pregnant with twin boys. Numerous complications arise after the news is revealed to Alarin.

Being forced to move into a larger home is the least of their worries. A potential crisis is unfolding on Azelle, and the planet’s Healers have been recalled from their positions around the galaxy. Not only does this mean that Tam is about to lose close friends Greg and Rory, both Azellian Healers, but also that her husband could become entangled in a looming war on his planet, where his tyrannical grandfather wields much power.

These factors quickly become irrelevant, however when Alarin is involved in a car accident and loses his psi abilities along with his intimate connection to his wife.

As readers have come to expect with this series, the drama is multi-layered and emotionally dense. Although the science fiction elements are muted, the real power is in the author’s deep and extended focus on the relationship dynamic between Tamara and her loved ones. Comparable in this respect to Laurell K. Hamilton’s Anita Blake saga, the story will please romance fans, who will enjoy the complex intensity of Tam and Alarin’s connection. Their bond is even more intimate because of their psi abilities, which allows them to communicate telepathically and know what’s on each other’s minds.

Breakneck-paced, action-packed, and loaded with delicious melodrama, this is a satisfying science fiction-romance hybrid.