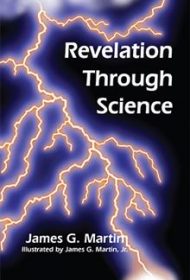 In Revelation through Science, James G. Martin sets out to prove that belief in a divine Creator and acceptance of the discoveries of science are not mutually exclusive, that “continuing revelation might be found in the scientific journals and instruments of discovery.

Martin’s passionate exploration covers a number of sciences—biology, geology, organic chemistry and genomics to name a few—and showcases his sense of wonder and awe. He hopes to show that the number of coincidences necessary to create intelligent human beings—from the complexity of the eye to the existence of complex proteins—is so enormous, it could only have come about through the agency of a divine Creator.

But covering so many disciplines means leaving much more out. Martin must often make large leaps, and frequently pleads with readers to be patient with the difficult material, to skip ahead if a section’s too hard. Written for the layperson (or “educated non-scientist,” as Martin’s back cover notes), the book shouldn’t need such caveats.

At one point, Martin tells the delightful story of Wilson and Penzias’ accidental discovery of the echo of the Big Bang. To prove their discovery was “indeed the cosmic signal from the dawn of creation,” writes Martin, they “were able to demonstrate (a) that a graph of the variation of intensity at different observed frequencies was a precise match for what Max Planck had found for radiation as a function of temperature….” No number of humorous illustrations or personal stories can carry novices past dense sections such as this.

The book includes a glossary (incomplete); index of names and subjects; bibliography of sources cited; list of Nobel Prize winners cited; and list of Implied Anthropic Coincidences and Conditions.

“Revelation through science does not dishonor our Creator, but adds to our understanding of His majesty and love for us,” Martin writes. Unfortunately, his difficulty in simplifying scientific concepts clearly for a general audience means his heartfelt message will likely fail to engage and persuade his readers.