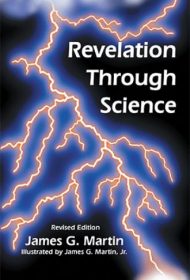 James G. Martin confronts the science-versus-faith controversy in Revelation Through Science, not only opining that this isn’t an either/or proposition, but also that science itself has become a modern expression of Divine Revelation.

Armed with a PhD in organic chemistry, as well as his lifelong personal faith journey, Martin has produced a work aiming to make scientific principles more accessible and to shed light on some of the historical clashes between science and faith.

Organized in a modular fashion, the book can be tackled chapter by chapter, or perused by preference of focus, including science specialties (e.g., biology, physics, organic chemistry) and hot topics such as creation versus evolution. Readers can even begin with the final chapter, to see how the author feels his faith informs his belief that science is integral to Divine Revelation.

The book is generally accessible, but those with more than just an upper level high school science comprehension will find it an easier read. Martin excels in navigating the common minefields in this type of debate. For example, to the charge that the religious hierarchy suppressed Galileo, Martin presents historical facts showing that the theory was not necessarily in question, but that Galileo was censured for disseminating it prior to approval. Similarly, the author responds to Intelligent Design proponents with scientific proofs countering the highly quoted concept of the impossibility of the evolution of the eye.

Martin names the usual pantheon of scientific giants: Darwin, Watson, Crick, Schrodinger, and others. However, he neglects to note that some science heavyweights were also clerics. For example, Georges LeMaitre, who proposed the “Big Bang” theory, was a Catholic priest.

The author presents his case confidently and knowledgeably and has done his research. However, while he includes a general list of references, the lack of specific citations is a miss.

Nevertheless, his conclusions, based on his own admitted Protestant viewpoint, are well-presented and make for a thought-provoking read.