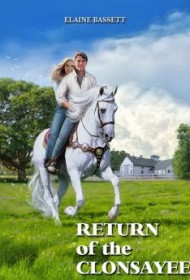 Fueled by an unflagging sense of wonder that will captivate readers, the second volume of Bassett’s science-fiction-and fantasy-blending Xidoran Prophecy saga continues the whimsical story of teenaged protagonists Charles Brookfield and Caroline Saunders and their adventures traveling between Earth and the fantastical world of Bridgeiro.

As evidenced by the tone and narrative content, this series appears geared towards young readers but—like C. S. Lewis’s The Chronicles of Narnia—can be enjoyed by adult readers as well.

Although this long novel displays the same detractions that encumbered its predecessor—slow pacing and an unwieldy storyline—the extent of those flaws is markedly lessened this time around. The narrative is more focused, and the various plot threads all have direction and clear purpose.

The story essentially begins when the two young adventurers have to return to school following a literally out-of-this-world summer vacation. It then alternates between Charles and Caroline’s “normal” life at school (basketball games, homework, dating, etc.) and their incredible experiences traveling to the magical realm of Bridgeiro, befriending mythical creatures such as the “clonsayee” (horse-like creatures with feathers in their manes), and heroically challenging those who are trying to undermine and ultimately destroy the secret society of time-traveling Sojourners.

The first novel of the series could be likened to an overloaded aircraft attempting to take off; at many points, the reader wonders if the storyline will ever gain enough momentum to not only get off the ground but to remain airborne. But the second novel alleviates those concerns with a much more driven storyline, a markedly increased focus on world building and character development, and, simply put, improved storytelling.

The aforementioned reference to Lewis’ Chronicles of Narnia wasn’t coincidental. Young readers who enjoy highly imaginative storylines featuring principled characters will find the second in this series to be engaging—rocky takeoff notwithstanding.