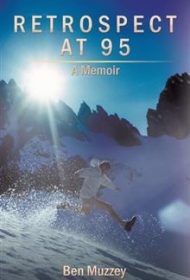 By the time a person reaches 95, he or she can be excused for not recalling every last detail of the past. So it is with Ben Muzzey, a former aeronautical engineer who looks back at his life in Retrospect at 95.

Muzzey’s book is not a highly detailed, all-encompassing autobiography; memories fade, he reminds us. Instead, the author presents a highlight reel: 29 chapters of varying lengths, in no chronological order, recounting memorable events in his life and the lessons he learned along the way.

Born in Lexington, Mass., in 1920, he overcame nearsightedness and dyslexia in grade school and graduated from MIT in 1942. He went on to a 40-year career at General Motors and Boeing. He was most at home, however, in the outdoors, becoming an expert skier, cyclist, mountain climber and kayaker. He also found time to build and run ski lodges, get married four times and raise a family.

Muzzey’s writing is straightforward, but he does display a touch of playfulness, as in describing his birth: “I was not aware of the details at the time, but the inconvenience to the family was pointed out to me later, when I was old enough to accept the blame.

Unfortunately, he can sometimes get overly technical (“. . . we had to determine if any resonant frequencies of the blade were too close to the major excitation frequencies…”), and his stories are often short on details and specific dates, which can be confusing.

But the author’s lessons are worthwhile, nonetheless. His life has been one of learning and discovery, mostly by observation and analysis. In closing, he lists some of the things he has absorbed, from the virtues of hard work to not worrying about others’ opinions, from what makes a successful marriage to the importance of monitoring one’s health.  Even within text that can be problematic, these are lessons for all of us.