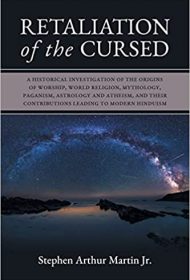 What began for author Stephen Martin, Jr. as a quest to better understand modern Hinduism turned into a mission to illuminate an original universal belief system that he theorizes is the root not only of modern Hinduism, but in fact, all major religions.

In Retaliation of the Cursed, Martin introduces his thesis by claiming that any history – religious or secular – relies on the personalities of those who recount it. As time passes, he posits, individual storytellers remember events differently and could possibly shape them to fit audiences. Bolstered with this view, he has collected accounts, myths, fables, and creeds from the world’s major belief systems to show their similarities.

The author has done extensive research and steadfastly attempts to connect dots. Unfortunately, some leaps may give readers pause. For example, Martin speculates that because the origin of the biblical name Abram is similar to that of the Egyptian name Abishai, and because the Egyptians describe the men in a similar fashion, that they were actually the same person. In another instance, his assertion that Native American peoples did not migrate to North America from one single entry point is based on a 19th century source, rather than more modern resources.

Throughout, astute readers will note that Martin liberally peppers many of his statements with “probably,” “it is possible that,” “perhaps,” and other such qualifiers, which undermines his arguments.

A topic as complex and far-reaching as analyzing global belief systems could fill multiple volumes, but Martin limits his to 198 pages, which might satisfy casual readers merely seeking an introduction to the topic, but is unlikely to appeal to serious scholars, who will wish for more depth. Still, the book provides a provocative think piece, and those who enjoy speculating on history and religion should appreciate it. Overall, the presentation is accessible to casual and serious readers, and the bibliography provides a jumping-off point for further research.