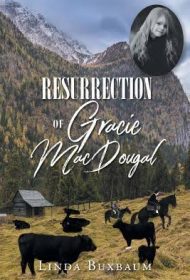 Resurrection of Gracie MacDougal is the story of a large American family ranching in Montana during WWII, told through the eyes of one daughter, Abi.

Abi MacDougal is age nine in 1939 when war breaks out in Europe, but her immediate concerns are two dramatic events that rock her family’s world: the accidental death of her brother Ian, and the kidnapping of her baby sister Gracie. Over the next six years, Abi recounts the family’s trials and tribulations, including her older brothers fighting in the war, her sisters starting their own families, and difficulties between her aunt and grandparents. She faces violence in her own home from another brother, but finds comfort in books and her love of animals, including a wild bear.

Structuring the story around the events of WWII is a successful approach. Abi wants to understand the world she lives in and closely follows the war with her father, listening to radio news, reading Time magazine and letters from her brothers overseas. Buxbaum builds a strong picture of life in these years, and Abi’s voice is believable, giving the novel the feel of a memoir.

A downside of this, however, is that the story becomes a series of episodes, rather than an overall narrative driving to a powerful climax. For example, when the family learns that Abi’s aunt has committed her grandmother to an operation against her grandmother’s will, they are initially outraged but quickly accept the situation and move on to the next drama. The final revelation, fulfilling the promise of the book’s title, should be highly dramatic, but the novel concludes in a rush. Loose ends are tied up, but a further chapter could have provided a more satisfying conclusion.

Readers should be aware that there are episodes of sexual and physical violence, but these are not recounted graphically. Despite the lack of dramatic tension, this is a pleasant, largely enjoyable coming-of-age story.