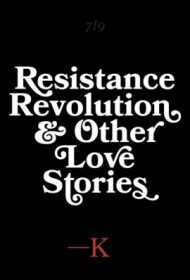 This short story collection pairs desperate love with acts of violence in a diverse and moving debut.

The author offers a range of approaches. Some stories are parables of justice pitted against base human impulse; others are nostalgic fables; still others are philosophical allegories or dystopian tales. Many show baffled humans longing for connection, such as unhappily married Joseph, who meets his dream woman in “Head Down,” or Habib, the suburban teenager who longs for his foul-mouthed friend’s on-and-off girlfriend in “Calamity Jane.”

Numerous stories revolve around characters trapped in or evading war. In “Wolf,” a dying soldier’s hallucinations lead him to a tiny schoolhouse in a forest where children make coffins and predators lurk. In “Radius,” Mustapha, a Muslim trapped in Gaza, mulls suicide to escape the violence of his world. All the stories, in some respect, show characters desperate to flee cruelty.

K’s style varies as much as the settings. The prose delivers limber beauty, such as when a character is waiting for “an ancient cold [to] sweep in and snuff out his waning happiness.” Or when the Gardener of the final parable advises a developer to “Cultivate only that which brings grace and beauty unto the world.”

Too often, though, an image isn’t allowed to bloom into full meaning. The language becomes opaque in the most charged moments, leaving readers unclear about the action. Many sentences are overburdened with description, and the lengthy philosophizing about violence and human nature is never as successful as the occasional poignant emotional turn, such as Habib realizing “When it came to breaking hearts, it was easier to break my own.”

Still, the author’s imagination is vast, and the sentences bristle with the emergent skill of a compassionate writer cultivating a powerful voice. The calls for “a just and kind world” full of “love and forbearance,” are achingly clear.

Readers who appreciate fiction that can leap from realism to dystopian fable and back will enjoy this book.