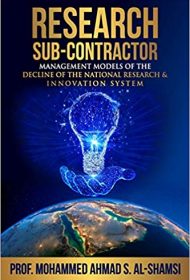 In his new book, Professor Mohammed Ahmad Al-Shamsi posits that any country’s lifeblood is its ability to improve research and innovation within its borders, rather than outsourcing ideas or importing them from outside. He believes that his home country, Saudi Arabia, needs to optimize this philosophy. To further that proposition, he offers Research Sub-Contractor: Models for The Decline of The National Research and Innovation System.

The author is clearly passionate about the topic and argues his case thoroughly and convincingly, outlining his hypotheses in chapter titles, then defending them with cogent, thoughtful suggestions. His writing style is crisp and understandable, even to the layperson.

While Al-Shamsi’s proposal is aimed at Saudi Arabia, his ideas are adaptable for any nation or entity. In fact, some of his proposals are directly based on observations of similar plans from other countries, such as Japan’s “blueprint for a super-smart society,” as the author dubs it, which itself was an updated version of Germany’s Fourth Industrial Revolution. One innovative idea the author suggests is to purchase manufacturing equipment, reverse engineer it, then recoup its initial cost by selling the goods produced.

The author also provides examples of homegrown innovations that began as individual efforts but formed the basis for global business, such as a memory optimization technology developed by an MIT professor that was later licensed to Intel, Microsoft, and IBM.

Al-Shamsi has the credibility to back up his proposal, having worked for more than a decade in this field, and he has observed and implemented portions of this plan. While his document would benefit by including written citations of his sources, that lack doesn’t diminish his presentation.

This is a thoughtful, step-by-step playbook for maximizing research and innovation, not just for countries, but with a little out of the box thinking, the ideas could be re-purposed to improve businesses. Those interested in augmenting their knowledge on the subject would do well to add this book to their collection.