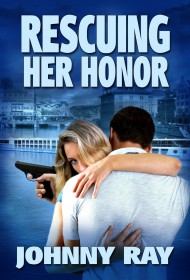 Rescuing Her Honor is a romantic thriller that comes complete with plenty of action, exotic locales, a ruggedly competent hero and a beautiful blonde heroine.

Rescuing Her Honor is the story of Vance, an ex-cop who wants to earn a law degree and start a bodyguard business, and his fiancée Noella, a Florida state judge. The duo travel from Tampa to Zurich to plan their wedding and to also open a safety deposit box owned by Vance’s recently deceased father.

Soon after they arrive, Noella is kidnapped by mysterious Russians who demand the contents of the safety deposit box in exchange for her return. Alone in a foreign country and without resources, Vance nevertheless figures out how to outwit the kidnappers. Along the way, the Swiss mafia, Interpol and corrupt local cops make appearances, leading to an exciting boat chase, a parking lot shootout and bomb scares in a bank vault.

While the action doesn’t disappoint, the plot is sometimes rushed and difficult to follow—particularly during a safety deposit box-switching scheme. And because Noella is missing for half of the book, the only character that’s well developed is Vance. Consequently, the romance scenes between the two aren’t as engaging as they should be because the reader doesn’t know Noella enough to care about her.

The author’s writing style is also problematic. Along with typos and grammar, punctuation and word usage errors (“the sounds of the clattery talk grinned [sic] to a halt”), there are numerous syntax issues, creating awkward phrases, such as, “He raised his hand in front of his face to shelter what he knew was a sore point.”

If these mechanical problems were eradicated, the book could be a thoroughly compelling romantic thriller. As it is now, it is often as distracting as it is engaging.