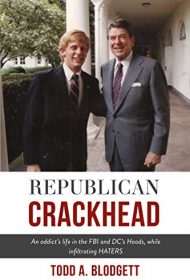 Todd A. Blodgett’s memoir recounts his battle with addiction, involvement in both mainstream and extremist politics, and work as an FBI informant.

The son of a prominent Iowa Republican, Blodgett parlayed his father’s connections into early jobs at the Reagan and first Bush White House, becoming a whiz at direct-mail marketing through his work on political campaigns. Entering the worlds of advertising and magazine publishing, he seemed set for a blandly successful D.C. career, until veteran far-right lobbyist Willis Carto made him a lucrative “offer I felt would be stupid to turn down.”

Working as a highly paid consultant, Blodgett quickly realized his employer was an unregenerate white supremacist. But, Blodgett freely admits, greed (and not sympathy for racism) kept him in the orbit of Carto and other far-right agitators, who used the sales of racist literature and merchandise and direct appeals to gullible followers—not to mention money laundering and fraud—to make hate a highly profitable business.

He became even more inextricably involved after the FBI pressured him into becoming an informant on the white-supremacist movement. Meanwhile, he had been introduced to crack by a prominent Republican strategist.

Comprising such disparate parts, Blogett’s story sometimes struggles to cohere but does take readers on one wild ride. Blodgett has an eye for the memorable anecdote, as in one chilling episode which finds him attending a neo-Nazi leader’s Hitler birthday party (complete with “Happy Birthday” lyrics translated into German). As he recounts seeking drugs in mostly African American neighborhoods of D.C., Blodgett paints the dealers and fellow junkies he encounters with far more affection, but his decision to render black characters’ speech in “dialect” will strike many as offensive. His account of belatedly and agonizingly escaping from addiction is heartfelt, but less gripping than earlier sections.

Nonetheless, with political violence and racial hatred an ongoing scourge in America, Blodgett’s chronicle of his bizarre journey could be a valuable resource for students of American extremism.