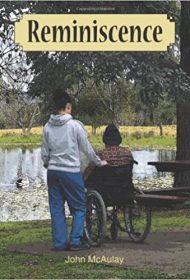 John McAulay’s Reminiscence is a multi-generational fictional saga that follows the triumphs and tragedies of the McKenzie family as they traverse from Scotland to Australia. The story is revealed in the present day through the memories of an elderly descendant living in a retirement/nursing home facility, and offers up heart-warming testimony about the importance of love, family, and a life well-lived.

Andrew Lochinvar McKenzie, a.k.a. Mac, gained much of his knowledge and insight into his family ancestry from hand-written diaries passed down through generations. With the love of his life gone, the normally self-reliant, born and bred “bushie,” with “wrinkles that ran north and south, east and west,” spends much of his days regretting the feebleness of aging, dreaming about the past, and sharing conversation and sage advice with his two favorite nursing attendants. Ultimately Mac comes to realize he has a greater connection to one of them than he could imagine.

Chapters easily transition between the present and past, a history that began in 1850 when three brothers ventured to Australia to seek their fortune. From mining and marriages, to homesteading, handling livestock, and raising families, these siblings and their offspring forge ahead. Unexpectedly, a savage kidnapping sets in motion a chain of events that impact the McKenzie family’s future for generations to come.

Against the expansive backdrop of an Aussie landscape marked by both beauty and the destructive remnants of raging rivers, floods, and drought, McAulay also skillfully weaves the history of a continent and includes themes of racism, social class bigotry, and more.

A smattering of errors appears throughout, including inverted words and misspellings. Also, as every McKenzie generation named a son “Andrew,” this adds to the challenge of following the extensive cast of characters.

Regardless, McAulay, like his central character, is an artful storyteller. Those who enjoy a saga that blends the joy and tribulation of family connections and illustrates their importance throughout our lives will appreciate this offering.