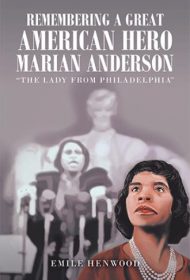 Emile Henwood compiles the triumphant life and career of world-renowned contralto, Marian Anderson, in this slender and vigorously researched biography.

Drawing on works by distinguished scholars, Henwood outlines Anderson’s beginnings as a young black woman from a poor Philadelphia neighborhood to her rise as an internationally lauded soloist whose gift of song enraptured audiences for 40 years.

Segregation in America in the 1920s and 1930s limited Anderson’s opportunities. Nonetheless, she sustained arduous touring schedules, traveling to Europe and performing to welcoming, “rhapsodic” acclaim. While hailed as “Europe’s Musical Royalty,” when back home, she was denied entrance to restaurants, hotels, and performance venues.

Even so, Anderson was a reluctant civil rights activist, believing her art carried the “power to erase all barriers and all boundaries” better than any political stance she could take. Ironically, her performance at the Lincoln Memorial in 1939 — the concert being a repudiation of a whites-only policy — touched off the modern civil rights era and enhanced Anderson’s iconic legacy. Anderson died at 96, in 1993.

The book is structured as a year-to-year chronology — an odd choice for a biography. Some years feature a sentence or two and others span several pages. Henwood describes the book as a “chronological commentary” condensed to facilitate study of its subject. At first, this structure makes for choppy reading, and the book feels like a factual slog. Despite this early floundering, the narrative becomes engaging as Anderson’s preeminent talent, barrier-breaking accomplishments, and far-reaching humanitarianism emerge.