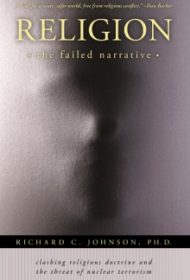 In Richard C. Johnson’s Religion: The Failed Narrative, the author presents a case for the superiority of science over religion in guiding us through our most central questions: Who am I? Why am I here? What happens when we die? While science offers more conservative and qualified answers, the “truths” of religion, according to Johnson, turn out to be no more than the products of human consciousness, generating stories to insulate against the apparent isolation of our existence.

Johnson presents consciousness as a product of evolution that promotes cooperation with others through self-awareness; a side effect is the invention of God, a “hologram” that our consciousness projects to explain the unknown. Inevitably, this illusion leads to religions, which in turn result in tribalism and conflict. By contrast, conflict is not the product of science: Science, unlike religion, breeds consensus and a reliable progression of knowledge.

Johnson believes there are those who are concerned by religion, but unable to articulate why, and his book is aimed at them. For readers who are drawn to authors like Daniel Dennett or Richard Dawkins, Johnson’s work will strike familiar chords, but his approach exploits an insider perspective of western religious traditions, reflecting the author’s own Christian heritage.

Religion: The Failed Narrative is a slim volume, efficient in its arguments, but at times incomplete. Johnson’s notion of consciousness arguably oversimplifies the contentious fields of neuroscience and philosophy of mind, and religious scholars are sure to argue that his scriptural examples are unfairly curated to prove his point. These deficiencies, however, need not detract from a work that offers compelling reason to view religion as one root source of strife and division—a paradigm that, in the author’s view, has brought far more harm than benefit to the world.

Religion: The Failed Narrative is unlikely to persuade the faithful, but it provides a helpful initiation for anyone skeptical of the value of religious traditions.