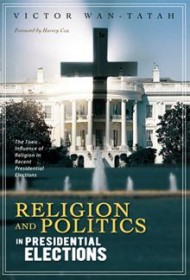 This brief book tackles one of the most contentious intellectual issues facing political scientists today. While the title implies a detailed historical perspective on the influence of religion in politics, the author actually concentrates on one election — the presidential campaign of 2008.

Author Wan-Tatah attempts to shed light on what he believes was the deliberate attempt by the Fundamentalist Right, the Mormon Church, and specifically Mormon political pundit Glenn Beck to hijack the presidential election of 2008 by systematically destroying the character of then-Democratic candidate Barack Obama.

To do so, Wan-Tatah first defines for the reader (in a useful chapter) Black Liberation Theology, a view of Christianity rooted in the slave experience. He then points out how the Reverend Jeremiah Wright, Obama’s pastor during the early days of the campaign, espoused this theology and skewers any critic of Obama’s relationship with Wright as being “The Antithesis of Christian America.” Such forces were out to defeat Obama in 2008—cause enough for the author to brand their influence as “toxic.”

The author’s narrative is hardly new. Anyone who watched the election through the prism of MSNBC or the New York Times is aware of these arguments. Wan-Tatah’s prose is uber-hyperbolic. He slings particular vitriol at the Mormon Church (castigating it for its “introduction of racism as doctrine”) and Beck (a “false prophet” and a “fanatical Mormon madman”). His heated rhetoric is accompanied by errors of both proofreading and fact (Oral Roberts was never a member of the Moral Majority) and a dearth of citations to support a book-length argument.

Agree or disagree with this well-worn argument, this book does spark thought and debate. But as its writer employs the use of passionate prose without the required scholarly balance, it must be approached with caution.