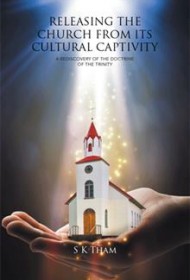 What is the relationship between religion and culture? How does one affect the other? And which should take precedence? These are just a few of the underlying questions found in S.K. Tham’s theological treatise Releasing the Church from Its Cultural Captivity.

Written to expound on the doctrine of Trinitarian theology (the system of thinking centered on the three-person trinity: Father, Son and Holy Spirit), Tham uses the Chinese Christian Church as foil for a wider discussion on the tensions that arise when religion becomes subservient to culture; in other words, when society’s values influence theological belief systems. Case in point, as Tham explains: In China, the relationship between father and son is one of separation and hierarchy. Not so in the Christian faith, which sees father and son as consubstantial or “of the same substance.” This cultural norm, Tham argues, prevents the Chinese from fully understanding one of the most important doctrines of the Christian faith.

At the book’s heart is the examination of responses: how China responds to the Christian message, how the West does; how God responds to Jesus and how Jesus responds back to God.  He yearns for humanity to put God first, to allow God to influence society and not the other way around.

Tham is a thoughtful, intelligent and methodical writer. While the tone is academic and ideas are sometimes abstract and difficult to follow, the author’s prose is structured and precise. He covers a lot of ground, including Chinese belief systems that many general readers may find unfamiliar. Yet, with Christianity on the rise in mainland China, this book is a provocative look at how religious thought is molded by cultural norms and will help many people understand the subtle and not so subtle ways Christianity is developing in the Far East.