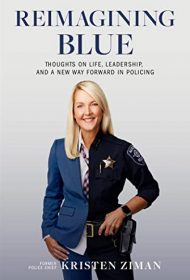 In this compelling, candid memoir, former Police Chief of Aurora, Illinois, Kristen Ziman discusses her life on the police force and offers intriguing insights regarding leadership and police reform.

The daughter of a police officer, Ziman knew early on she wanted to wear blue. She joined the Aurora police force (the second largest city in Illinois) as a cadet after high school, eventually becoming the department’s first female lieutenant, commander, and chief during her 30-year career.

At 5’4”, Ziman was often discounted by other officers due to her small stature. To compensate, she adopted a tough-guy persona but soon realized that being authentic made her a better officer. She learned that encounters approached with respect and communication had the best outcomes.

As a lieutenant, Ziman had an epiphany that turned her department on its head. She allowed officers to choose their own assignments, performing tasks they enjoyed, which resulted in dramatically increased performance. Ziman’s courage to be a “disruptor” served her well. She was a continual learner, earning a master’s degree and graduating from the FBI National Academy, along with many other prestigious law enforcement programs.

Ziman is a Brené Brown-quoting cop who believes law enforcement is essential. However, she feels the institution must admit that racism exists and deal with prejudiced officers vigorously. Among other thoughts, Ziman believes police unions have too much disciplinary power and that law enforcement dollars should be allocated to social services to allow joint intervention.

Ziman’s engaging writing is peppered with salty expressions, occasional four-letter words, and lively anecdotes. For example, Ziman recalls chasing a man on foot during one incident. “It must have looked ridiculous for a five foot-four baby cop with a bouncing ponytail to be sprinting after a six-foot three muscleman.” Catching up with him, she clung to his back, eventually talking him into stopping.

Reimagining Blue reminds us that we are all flawed, but essentially good. Readers will savor Ziman’s authentic, vulnerable and expertly crafted narrative.

Also available as an audio book.