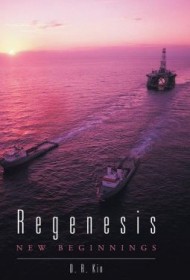 Oncologist Alex Liang is flying back from Switzerland to Malaysia when he is called to attend to a passenger’s medical emergency. He performs a rudimentary surgery to create an airway, thus saving the life of Eric Shi, owner of a prosperous Taiwanese company that has invested in the pharmaceutical industry. Shi’s wife, Mei Lin, has late-stage lung cancer. When Shi and Liang arrange to meet later on, they are linked by their professional and personal interests in cancer and green energy production. Shi funds Liang’s plan to harness energy from deep-sea currents using ocean turbines, while Liang develops a technique for attacking Mei Lin’s cancer with a strain of the Epstein-Barr virus.

Unlike ever-popular dystopias, Kin’s is a fundamentally utopian vision: Technology works, and seemingly hopeless situations improve. That is not to say that all goes well for these characters, however. The “Regenesis” renewable energy project looks set to end in disaster when a Russian oligarch plants bombs at the Norway test site. Although this central section on energy testing is the most exciting, it is also melodramatic and farfetched, with unnecessary subplots involving Shi’s college sweetheart and Liang’s daughter’s friends, one a sexual predator and the other blackmailed into spying.

Kin’s medical knowledge comes through clearly in passages about Mei Lin’s treatment, and he seems to be just as comfortable discussing the prospects for green energy technologies. Most of the action sequences occur just two-thirds of the way into the book, though, which means that Part Three, returning to Mei Lin’s medical struggles, feels anticlimactic. This, along with occasional typos and grammatical issues, are slight drawbacks in what is otherwise a carefully constructed story revolving around scientific concepts and clever coincidences that should hold solid interest for suspense fans.