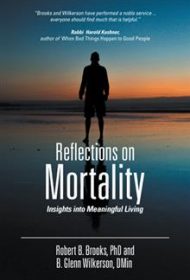 This thoughtful, creatively-edited collection of essays on mortality succeeds in giving insight, solace (and a dose of gallows humor) to those contemplating their own demise—in other words, anyone with a heartbeat.

The editors, McLean Hospital/Harvard psychologist Robert B. Brooks and prominent social/emotional health authority B. Glenn Wilkerson, never come on like a pair of grim reapers. Instead, the broad spectrum of views of the 17 writers they’ve assembled here— including a Buddhist, a Muslim, a grieving mother, a funeral director, a neurosurgeon, etc. (the editors also contribute one piece each)— share one buoyant conviction: “an open acceptance of the reality of death somehow releases the living to live more joyfully in the present.” In these pages, Eastern bliss clearly outranks the common Western fear of a dark end.

Among the views noted here, Rabbi Rifat Sonsino writes: “Most likely, the energy I represent will return to the source of energy of the universe and become one with it. . . in the meantime, make up for the brevity of life by heightening its intensity (and living) richly, creatively and nobly.” Similarly, Vermont funeral director Jefff Staab exhorts readers to: “Fill your world with all the love you can take.”

Traveling in India, editor Wilkerson goes to Varanasi, on the banks of the Ganges, where tragically poor people bring their dead relatives for public cremation. In empathetic and eloquent prose, he describes their joy and (a keynote of this collection) their acceptance of death as “an ongoing aspect of the human journey.”

As indicated above, the essays often urge readers to live life to the fullest. This may seem a cliché, but the writers here manage to imbue the thought with fresh impact. They offer personal anecdotes often sparked by losses in their own lives and present their ideas in meaningful, concrete, accessible ways.

This is an intelligent and diverse volume of well-written and thought-provoking essays. It belongs on any thinking reader’s shelf.