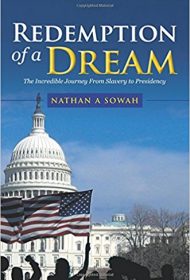 The enslavement of millions of Africans and their forced immigration to the Americas was among the cruelest acts of subjugation in world history. In Redemption of a Dream, Nathan A. Sowah aims to express his admiration for his African forebears and alert a new generation, possibly less aware of slavery’s horrors, to their inherited ethnic and cultural history.

Sowah’s hefty volume begins with several introductory sections that explain the author’s purpose in writing the book and offer information on his personal background. These sections are characterized by the author’s passionate, but rambling and repetitive prose. The book goes on to offer a plethora of information about the slave trade, conditions of black people in the U.S. pre- and post-slave era, and the step-by-step struggle for civil and human rights that led finally to the election of an African American president.

African by birth, Sowah, who often writes from a religious perspective, also strives to eradicate misconceptions about the African continent and its history. He reminds us that slavery existed among Africans and between Africans and Arabs before the incursion of Europeans, and notes that Africa has valuable resources, remarkable geography, ancient culture, modern industry and advanced technology. Along with the many positives about his own upbringing in Africa, he details some mixed messages from his childhood concerning such complex issues as polygamy.

There is much more here, and Sowah’s intensely held views are laudable and emotively expressed. His book, however, is unfocused and overwritten. The introductory material comprises nearly half of this 600-plus page tome, and the book itself reiterates much of what is stated there. The author’s personal life consumes much of the book, with events repeated twice or more. This intervening personal memoir, not always relevant to the book’s stated purpose, would be more effective as a separate volume, distinct from Sowah’s historical study of African American “redemption” from the 1600s to the present day. Finally, the text is replete with punctuation errors that further slow the proceedings.

The essence of Sowah’s book is a tale worth telling. Unfortunately, readers must work too hard to extract the intended messages from his often meandering, overstuffed account.