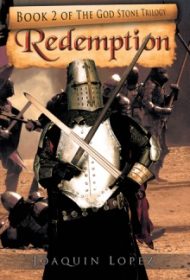 Joaquin Lopez cites contemporary fantasy as a guiding influence in his crafting of The God Stone Trilogy. Specifically, Lopez points to Robert Jordan’s The Wheel of Time series, a saga spanning thousands of pages and more than a dozen volumes. While The God Stone Trilogy is much humbler in scope, Lopez incorporates many of the same elements: faraway realms, magical powers, memorable characters and an epic struggle between good and evil.

Redemption is the second in the series. Although beginning in the story’s middle will be a bit jarring for new readers, the gist quickly becomes clear. For nearly 20 years, Jack has been banished from his home, a realm known as The Kingdom, to the wilds of the isolated land called Rumalia. He undertakes a perilous journey to return to the land of his birth and reclaim his place beside the princess Linda and his mother, Anna.

Jack has been prophesied as the “Chosen One” who will restore order to The Kingdom, and the stakes are high for his quest to return. Aided by the native Rumalians as well as the Gods, Jack must face temptations, distractions and uncertainty on his trek.

The tale is a standard hero’s journey that draws on structures as old as Homer’s The Odyssey. Lopez invests all his characters, from Jack to The Kingdom’s royal family to the Gods, with depth and heart.

Unfortunately, the story is marred by syntax, grammatical, and spelling errors, which abound, even in the maps. In one poorly punctuated run-on sentence, Anna reacts to seeing Jack tortured: “She cried and cried no matter how hard she tried not cry and to bring herself under control she could not stop crying.” Such missteps greatly detract from the story’s impact.

Still, the novel offers rewards in its well-wrought characters. Those who can overlook the book’s many technical errors will find an entertaining fantasy tale for young readers or hardcore genre fans looking for less sprawling fare.