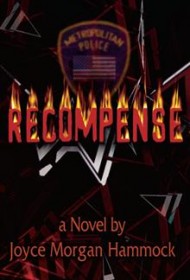 Everyone loves Eddie Collins. He’s a loving son, a good student, and a great friend. So why is he sitting in prison at the tender age of 17, accused of rape? Recompense, a thriller by Joyce Morgan Hammock, traces the complex web of secrets and violence that threaten to ruin Eddie’s life unless the true criminal can be brought to justice.

The mystery in Hammock’s first novel is not so much who committed the crime – the rapist is clearly pegged in the early pages – but how many other victims he has left in his wake, and how they are all connected. The list is long, but Hammock never loses focus. Characters cross paths for well-defined, if somewhat contrived, reasons.

Hammock creates atmosphere with unusual details, like the ambient sound of prison corridors. She writes: “No matter what the cause, every sound was reduced to a clank, clankety-clank. The only distinguishing characteristic was the rhythm.” She evokes hospital corridors, police precincts and dark street corners with equal originality and authenticity.

Maintaining suspense in a story where the perpetrator is a known quantity is difficult, and Hammock meets the challenge with varying degrees of success. Graphic violent scenes, some sexually explicit, heighten the tension, but the intervening police procedurals slow the pace. The psychology behind the perpetrator’s attacks is fascinating, though; readers will keep turning pages to find out what makes this guy tick.

Readers will also love Eddie, a genuinely good kid who has had more than his share of misfortune. It’s impossible not to root for the young man and his extended family, and to hope along with them that justice will ultimately be served.