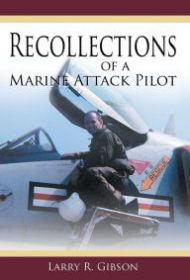 Larry R. Gibson spent more than 20 years in the Marine Corps and logged 5,600 hours in the air, 1,500 of them in tactical aircraft, including 250 combat missions in an A-4 Skyhawk during the Vietnam War.

That alone would provide plenty of fodder for his memoir, Recollections of a Marine Attack Pilot. But Gibson’s reminiscences are not all John Wayne blood-and-guts war stories. He’s just as likely to write about types of landing gear, how he built his own VW engine-powered plane, or about playing bridge with Marine Col. Donald Conroy, the real-life “Great Santini.”

There are 58 chapters here, short and in chronological order. The author notes that he was working from memory, relating events that occurred between 30 and 50 years ago. His writing is straightforward and generally engaging, although some chapters bog down in technical detail, such as one on landing gear.

If anyone has reason to brag, it’s Gibson. The author was one of only two men in his squadron to qualify to fly nuclear bombing missions, and during one ground battle he ran out into a swampy area to guide a rescue copter to a safe landing spot. But he downplays those events, often with a wink to readers (“My wife is always telling me my self-esteem is too high. It is actually only average for a retired Marine jet pilot”).

He also displays an endearing sense of humor. Writing about one pilot who introduced himself as “Slick,” he notes: “Not only did we have a brand new squadron pilot, but he had arrived with his own self-appointed, image-enhancing nickname.”

Gibson notes that the book was written primarily for himself and his family, and this seems the likely audience, as the stories lack the vivid detail and narrative momentum necessary to attract general readers. Still, aviation enthusiasts or students of air combat in Vietnam will likely find interesting information in Recollections.