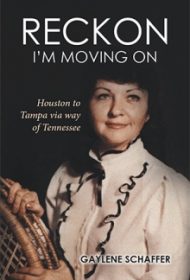 Gaylene Schaffer takes to the road in this short memoir that covers about 15 months of her travels and many hundreds of miles.

Her 1981-1982 journeys from Texas to Tennessee to Florida—and points in between—seem born of curiosity, or maybe just wanderlust, and feature other main players, including her father, a vodka-swilling aunt, a lusty hotel clerk, and a mysterious and attractive trucker whom she falls for. These characters are a good starting point for what could have been a fun account. But many of her stories aren’t fleshed out sufficiently. Others seem to end in mid-account. Still others are told and retold to the point of confusion. From the book’s first sentence, there are confusing passages and grammatical missteps (“Mom died on Wednesday, September 9, 1981, on her sister Tressie Pearl’s birthday, one month away from her 70 years old.”). Malaprops abound (“. . . her head shuck in amazement,”   “You get my drip?”  and “[I’d] have to scrabble to hide them.”)

But the biggest problem with Reckon I’m Moving On is repetitiveness. Sometimes it’s a minor issue; on three occasions she gives the same description of a house where she stayed, down to the race-car wallpaper in her room. Other times, the repetitiveness is extensive and puzzling; some long passages covering several pages are repeated, word for word, for no apparent reason. The reader will have a feeling of déjà vu.

Schaffer offers occasional glimpses of central Texas color. Writing about a conversation with her father, she notes his demeanor: “‘I sure know how that is,’ he added twitching his eyebrows, harking and then spitting his tobacco into his spit can.” Those little gems are few, however, and readers will likely be left shaking their heads more often than not.

In sum, the memoir would have benefited from a more focused story and closer editing.