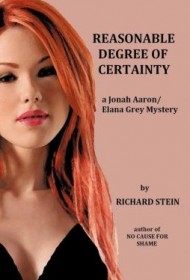 The bludgeon death of an expert witness called to testify in a medical malpractice trial is the focus of this engaging murder mystery in Richard Stein’s sequel to No Cause for Shame. Investigating the case is Elana Grey, previously known as AJ Golden before faking her suicide and going into hiding in Nashville five years earlier.

Elana only investigates on the side, as she has developed a lucrative career as a scriptwriter for a highly rated television “comedy drama.” She enjoys investigative work because it sparks ideas for her show’s episodes. She and her husband, private investigator Jonah, also have written the script of a soon-to-be-released movie.

Elana has been hired by the law firm representing the malpractice defendants because they fear one of their colleagues will be implicated in the murder. As Elana unravels the complexities of the hotel death, she discovers hidden affairs, false accusations, fraudulent acts and more. She also learns more about herself and ponders telling the world the truth about who she really is.

Fresh plot points move the story briskly along and the spirited writing can be clever. In describing a wealthy lawyer’s countenance, for instance, Elana says, “He gave the impression that if one breathed deeply enough in his presence their lungs would fill with money.” Stein also is masterful at giving his principal characters depth, allowing us to ramble around inside their heads to better understand what makes them tick.

Unfortunately, we learn little about the people harmed by the malpractice, which leaves readers with less reason to care about what happens to the unsavory men and women wrapped into the plot. Nonetheless, the book builds our interest in the lives of Elana and her husband, no doubt hinting at yet another book to come.

Overall, Reasonable Degree of Certainty is sufficiently entertaining despite its thinly drawn supporting characters. The author stirs up enough imaginative details to keep readers focused until the last page.