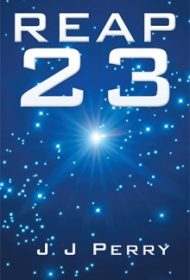 REAP 23 concerns the 23rd mission in the Repopulation, Expansion, and Annexation Program (REAP) to repopulate distant planet K-70 EDN 7 after a devastating pandemic on Earth.

It’s 8,000 years after REAP 23’s mission. Because the missions have almost all failed, their history has fallen into obscurity, overshadowed by natural disasters and war.  Despite this, a cult has formed around the missions’ message of hope and a new Eden. Now, two young graduate students find messages from the forgotten REAP 23 mission. With the development of faster-than-light interstellar travel, a ship is sent to K-70 EDN 7.

Part One concerns the initial REAP 23 voyage; Part Two brings the narrative back to Earth, bounding over 8,000 years of geopolitical changes; and Part Three returns to EDN 7 and the fate of the mission survivors.

The premise harkens to Golden Age Sci Fi and its trope of a wounded Earth sending adventurers to create Edens in the stars. But there are new twists here: This story presents female characters as the strong ones, persevering when the men almost universally fail them. It also offers an interesting, updated, use of robots and explores the complicated emotional relationships between the eight couples selected to breed and raise descendants, showing the perils of long-term claustrophobic environments. The crew is eventually torn apart by jealousy, adultery, psychoses, and even murder

Part One’s complex scientific facts and medical explanations will likely please fans of Andy Weir’s Artemis and The Martian (although they may be off-putting to others). Some drawbacks also exist: It’s sometimes unclear who is speaking; the crew’s interaction can slip into soap opera, one calamity following another; and while it’s set far in the future, words like “dude,” and “radically awesome” are still spoken on Earth. Proofreading errors can also be distracting.

Such issues aside, J. J. Perry delivers a complex, challenging and thought-provoking book that explores inner as well as outer space. Readers will find many rewards here.