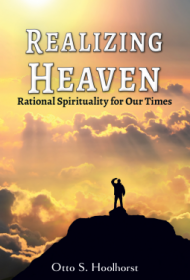 Recent polling by Pew Research reveals that Americans increasingly describe themselves as “Nones,” claiming no religious affiliation. The rejection of traditional religions opens the door to rational treatments of spirituality, such as what is offered in Realizing Heaven.

Otto S. Hoolhorst begins with a brief autobiography, revealing his family’s origin as European colonizers in Indonesia who were interred by the Japanese in WWII. Fleeing to Australia after decolonization, the author was raised by an abusive father.

After denouncing authoritarianism and conformism, Hoolhorst presents a scathing indictment of Christianity, positing a view that that the dynamics of our own minds is all that we can know; the nature of reality is unknowable.

The author presents an ethic of radical freedom, arguing for an untrammeled free-will that need not succumb to even the threat of death. It’s the fear-based conformity of “the masses” that enables oppression, he holds. Hoolhorst critiques legal systems and what he sees as the “pitfalls” of political activism. He also discusses an alternative to the dynamic of oppression/submission he sees as the operative force in society. Ultimately, he believes it’s only the common person’s spiritual evolution that can revolutionize society.

While sometimes thought-provoking, the book has several flaws. First, it’s actually multiple works under the same cover without a structure to unite these disparate musings. Those interested in his critique of Christianity may glaze over reading his detailed treatment of the Australian legal system.

Also, the narrative can be self-contradictory. The author denies all deities but then creates a proxy god he calls “The Indefinable.” He denounces dogmatism, but states a view of what occurs at the moment of death without supportive evidence. His writing frequently has a harsh, dismissive tone, often resorting to sweeping generalizations about how “most people” are —without sources to verify such indictments.

In the end, readers are too often left with judgmental, prolix ramblings. Those inclined toward a ferocious, anti-Christian, anti-conformist view might find some rewards here, but most would be better served to read Nietzsche.