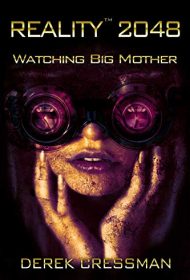 After two critically acclaimed nonfiction releases (The Recall’s Broken Promise and When Money Talks: The High Price of “Free” Speech and the Selling of Democracy), voting rights advocate and former California Secretary of State candidate Derek Cressman’s first novel gives readers a glimpse into the near future. Reality™ 2048: Watching Big Mother is an Orwellian cautionary tale about a populace force-fed propaganda and mindless entertainment to keep them in a state of ignorance and tractability.

Vera, 34, lives in Los Angeles and works at the Department of Information, an agency responsible for perception management. With so much misinformation being released into the cybersphere, it’s the department’s mission to counter that with factual data. But Vera—after realizing that her work is being manipulated and turned into weaponized misinformation—vows to escape the grip of the Establishment and its brainwashing campaign. As the story evolves, she and her lover, Chase, devise a plan to address the problem.

While less thematically impactful as classics like George Orwell’s 1984, Ray Bradbury’s Fahrenheit 451, or Anthony Burgess’s A Clockwork Orange, Cressman’s dystopic tale of humanity mindlessly existing in a reality that is anything but real still packs a powerful punch, particularly considering the country’s current political landscape. Journalists using emojis in headlines; people lost in reality television, gaming apps, and infomercials; children raised by computer programs—it’s a future America void of critical thought. One line in the novel sums up the mindset perfectly: “…life is what happens to you while you’re busy watching episodes.” Rich character development and world building add to the novel’s impact, as does the intriguing philosophical undertone.

A minor criticism involves the extended sequences where Cressman shares excerpts from an obscure history book. While enlightening, they read like dry infodumps and quickly become tiresome.

Depressing, disturbing, and thought-provoking, Cressman’s novel is like a slap to the face. One hopes readers are not already too enmeshed in their own false realities to appreciate the message.