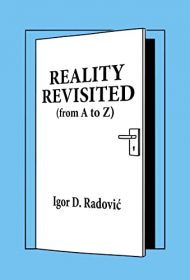 Reality Revisited (from A to Z) is much like a dictionary, but it only defines terms the author wishes to define—and those definitions range from the quirky and satirical to the philosophical and even political.

In the Foreword, author Igor Radovic explains that “some of the notes in Reality Revisited are attempts at humor and satire, and [they] should be taken with a grain of salt. The rest are observations and opinions with which the reader may agree or disagree, depending on his or her upbringing, life experience, and character.”

The book starts at “abdication and resigning” and ends with “Zurich,” followed by a brief addendum that includes even more definitions for terms, most of which already received definitions in the main text.

The number of definitions per word vary widely. The noun form of “change,” for example, has 78 definitions, including “what every new government starts by promising, and ends up by trying to prevent.” “Himself” has only one: “to judge by the harm inflicted on him, man’s worst enemy.”

A quick Amazon search indicates that Reality Revisited was preceded by Dyspeptic Definitions, in 2013. Both Reality Revisited and Dyspeptic appear to take inspiration from Ambrose Bierce’s classic The Devil’s Dictionary (1911). Bierce’s book was a compendium of the witty and often sarcastic definitions Bierce had previously published in magazines and newspapers. Those were succinct, droll, and often savage. For example, he defined “apologize” as “to lay the foundation for a future offense.” He defined a “novel” as “a short story padded.”

Reality Revisited has some similarly impressive sharp takes that merit positive comparison to Bierce’s work. Others, though, fall flat or seem convoluted, as with “healthy diet”: “a second lease on life for many a failed menu.”

Readers will find jewels here. But whether they’re up for scouring all 57 of the author’s definitions for “experience” (make that 58—it’s also in the addendum) is anybody’s guess.