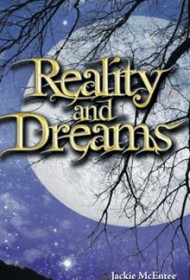 Dreams become reality when 12-year-old Dylan and his terrier, Skye, are transported through his bedroom window to a parallel world to battle the forces of darkness.

In Reality and Dreams, a fantasy adventure novel by Jackie McEntee, Dylan is obsessed with dreams. Every night, he travels in his sleep with Skye to another dimension, first to a place where a blue kangaroo enlists his help to destroy evil creatures. Soon he meets in his sleep a wicked twin named Gordania, who kills innocent people and challenges Dylan to a fight at the Gates of Hell.

One night Dylan discovers that what he dreams of is real. He also discovers he was born twice — first in 1902 to a witch and warlock, then in 2001 to humans. His first life ended when Gordania turned evil, drained Dylan of his magical powers and put him into a deep sleep. Then, 87 years later, Dylan was reborn to a couple on Earth.

Now it’s up to Dylan to use his newly restored powers – including an ability to turn creatures to dust – to stop Gordania. But first he’ll have to recruit a telepathic human, learn about Skye’s true nature, befriend a talking cat and decide if he’s morally up for killing.

The story has an interesting premise and curious creatures, including a dragon that forms words with his smoky breath. The writing lacks depth, however, and some of the violence seems gratuitous. In one scene, Gordania schemes to freeze hundreds of workers and break their necks with her bare hands. In addition, grammatical errors on the first page get the story off to a rough start.

Although the quality of writing may not be high and the plot is simplistic, the story might appeal to readers who enjoy tales of good versus evil.