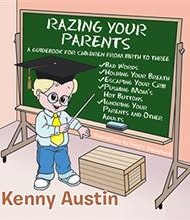 Walk into any bookstore and you’ll find shelves overrun with parenting manuals. But what if we just left the heavy lifting to the kids instead? Razing Your Parents is an often-amusing take on that idea. Presented like a children’s picture book, it’s full of advice for the three-and-under set on how to work a tantrum for maximum reward, fill a diaper on demand, and pretty much manipulate all adults within a five mile radius to do their bidding.

Author Kenny Austin writes with the assumption that kids understand much more than the adults around them are aware of, advising them to set their grandparents in competition over who loves them the most to score more gifts, or plot that first crib break-out. Illustrator Dwight Nacaytuna’s humorous pictures include a toddler pole-vaulting from the crib or deviously scrolling through a smart phone with Jack Nicholson-esque eyebrows while waiting to say his first word.

While every joke hangs on roughly the same premise, the humor generally works. Parents who find their offspring tyrannical and condescending may recognize the attitude behind lines advising, “(Adults are) well-meaning, even if their words often seem juvenile.”

Razing Your Parents would make an ideal gag gift for new moms and dads who are punchy from lack of sleep. The illustration of a baby setting an alarm clock in its crib may hit a bit close to home for the sleep-deprived, but as is often the case with humor, it has the ring of truth. This is an entertaining diversion that targets its audience well and lands several laughs as a result.