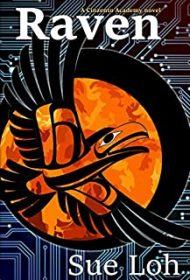 Raven is a fast-moving, young adult thriller revolving around select teens who investigate the hacking of FBM Bank—but quickly realize this is no ordinary attack.

Fireball, 16, leads Team Raven, an elite, diverse group of teens attending Cinzento Academy in a near future Seattle. Fireball has lived at the Academy ever since her mother was arrested for stealing to support a drug habit, and she has turned her life around: Now, in addition to leading one of the school’s topflight teams, she’s also an expert in kung fu and tae kwon do – skills she’ll need as the drama unfolds.

Fireball also has a crush on fellow team member Books, but that may change with the arrival of new recruit Noob, a talented programmer who recently lost his parents in a tragic accident.

After some investigation, the team soon suspects that an artificial intelligence is at work. But trouble arises as they disagree on how to deal with it, and when the hack expands, threatening transport and hospital systems, the students’ involvement is challenged. Not everyone at Cinzento supports them, and social media blows up with calls for Team Raven to be closed down.

Loh delivers a diverse group of characters – both in Team Raven and the adults who care for them – and this debut has strong series potential. The dialogue is slick and believable, and a range of conflicts and a hint of romance round out this story effectively.

The technological aspects, however, can sometimes overwhelm non-tech-oriented readers (e.g.: “He was peering at a replication process in one of Hack’s decompiled executables when he saw just such a wound. One of the iterative subroutines in the executable was interrupted by a second embedded process that seemed to have no relation to the parent process.”)

Overall, though, Raven is a compelling read with tension ramping up until the truth behind the hack is revealed. Young adults interested in computers and AI will enjoy the tale.