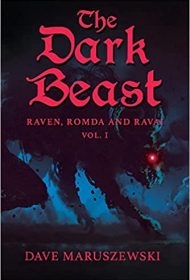 In the first volume of Dave Maruszewski’s middle-grade book, three young squires pursue a half man/half beast who threatens to destroy a town—and then some.

Learning that a priest in another town is worried about “odd happenings,” a king assigns his charges Raven, Ravai, and Romda, to investigate. When the trio arrive, the priest is being attacked by a beast, but Raven injures it and the beast vanishes in a cloud of smoke.

The priest explains that the “Dark Beast” wants “to kill the young and destroy towns…” He confesses that before the attack, when the beast showed interest in an obelisk in another town, he was so frightened by him that he gave him directions. The priest worries: “What could he want with that obelisk? What have I done?” The three begin their journey toward the obelisk to find the beast, while the priest stays behind.

Along the way, they meet various strangers who share compelling stories about the beast (although some impossibly quote entire conversations in their stories and describe the beast’s innermost thoughts). The squires also track down a wizard who fought the beast; she travels with them to the obelisk. Eventually, the story builds to an action-packed, battle-of-magic ending.

The narrative is told in a readable, chronological manner, and the squires are appealing characters, as is their comical banter. Readers will also appreciate the well-choreographed fight scenes.

However, there’s little description throughout, depriving the novel’s young audience of a rich sensory experience. Additionally, the beast’s motives are often unclear. For example, at one point the beast remarks that “[The town] needs to start over. I can only do that by destroying it first.” Readers will wonder: What is wrong with the town, and what would the beast replace it with?

This story has plenty of engaging action and some fun, silly, kid humor. Still, it requires revision to address the aforementioned issues in order to attract a wide audience.