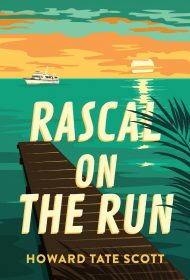 The story opens in the late 1980s when Guy has been served divorce papers. His years of self-medicating with alcohol are catching up with him, too. When Newt Ballerini, an acquaintance of Guy’s and suspected killer in a cold case from the 1960s reappears after a long absence, Guy and Critter become embroiled in his defense. As Critter dives into the details to help Guy, he faces his own memories of that tangled time and unsettling truths about his beloved father.

The genial style of Rick Bragg meets the pathos of Pat Conroy in this touching, often laugh-out-loud tale. The novel brims with wry language (“A secret told is a betrayal and a secret kept is a burden, but a secret fairly discerned is a sigh of relief”) and knee-slapping metaphors (“Tatum was…as skinny as a mosquito’s leg and no taller than the slide-out cutting board in the kitchen”). Scott also scoffs at Southern stereotypes. The simpering Southern belle in this tale went to law school, and a black woman character grows up to be a judge. The novel could have stayed in the shallows of humor and succeeded, but the story becomes noteworthy, even enduring, because it delves deeper.

The tale’s heart is the complex Guy Stillwell, who, with his kindly brashness, seems a revisioning of To Kill a Mockingbird’s Atticus Finch. This allows a correction of Harper Lee’s view of the South instead of an homage, and the novel persistently questions how a person, community, and region can recover from a haunted past. It’s in these explorations and the answers offered that the novel shines.

Fans of Southern stories and historical fiction are sure to love this insightful, unforgettable debut.