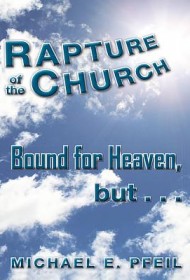 When we think of prophecy, many of us envision predictions for the future. In the Christian tradition, however, prophecy is considered preparation for the coming of Jesus and the fulfillment of promises made in the Old and New Testaments. In Rapture of the Church, author Michael E. Pfeil examines the End Times prophecies, aiming to understand more fully God’s control over time, place and history and to issue a warning to believers to be vigilant in their faith.

Leading with a useful chapter explaining basic eschatological terms and ideas (e.g., the Elect, the Anti-Christ, the Second Coming and Great Tribulation), the author goes on to explore such topics as the Rapture (the belief that the faithful will be united with Jesus at a specific time in the future), Daniel’s prophecy of the 70 weeks, and the seven-sealed scrolls of the book of Revelation. Along the way, he gives close readings of the book of Matthew and Paul’s first letter to the Thessalonians. At the book’s heart, though, is the author’s argument for the Pre-Wrath End Times theory, the belief that the faithful will be reunited with Jesus toward the end of the seven years of Great Tribulation (as opposed to the theory centering that reunion at the start of that period).

A highly specialized text, Rapture of the Church makes for interesting, albeit sometimes daunting, reading. Intelligent and methodical in his approach, Pfeil attempts to assuage a difficult topic with an approachable writing style, but he remains in need of an editor to help condense his material and avoid repetition of ideas, namely in Chapters 10-13 on Revelation. (Just one example: the information about ekkleesia on pages 97 and 126 could have been reworked in a more streamline fashion.)

In sum, general readers may feel a bit overwhelmed trying to understand the ideas at the heart of Pfeil’s book. Those with a solid grip of eschatology, however, will find ideas worth considering in this volume.