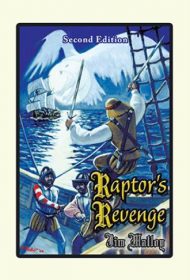 Raptor’s Revenge is a thrilling historical novel set during Elizabethan times, when English privateers sunk Spanish ships and stole their treasure as part of the war between the two nations.

The story follows Jamey, a young Irish man who takes to the high seas to avenge his family, slaughtered by a scheming Spanish diplomat. Jamey becomes known as “El Raptor” to the Spanish, feared, along with his diverse crew, for his near-supernatural skills and tactics. Finding his quarry in Spanish-governed Jamaica, Jamey also falls in love with Maria, a formerly poor native who acquires wealth and mixes with the island’s elite. Through cunning, luck, and the help of his friends, Jamey faces off against his family’s killer.

The novel is filled with historical details that provide authenticity without overwhelming the story. Jamey’s crew, especially the one-eyed Patch and his sister Jade, have chapters of their own revealing their pasts. The main villains, vicious Damon DeSago and sadistic priest Father Tomas, have backstories that make them somewhat sympathetic. DeSago is driven by revenge, and Father Tomas has a surprising connection to Jamey.

The book has plenty of swordfights, sea battles, and other perilous actions to keep readers in suspense. Early on, Jamey is captured and made a galley slave on a ship, with the possibility of his quest for revenge ending early. Lots of twists and turns keep readers wondering what will happen next.

The first 63 pages detail Jamey’s parents, their history and courtship. While this section is replete with action and sets up the rest of the novel, switching to Jamey after spending so much time with his parents’ story feels somewhat jarring. Tenses also occasionally shift from past to present. And there are explicit sexual scenes that are treated lovingly (except for Father Tomas’s depraved fantasies) but might scare off some readers.

Overall, those looking for an exciting story with an adventurous hero and historical details will enjoy Raptor’s Revenge.